English singer/songwriter Robbie Williams always had a very colorful music career. First he made it big in the English boy band Take That.

Then the band broke up, and Robbie was the only member who truly succeeded as a solo artist for many records in a row. He changed and switched back between genres, made remarkable videos and rejoined Take That for even more glory. So below are 17 Robbie Williams facts:

3. Take That found real success in the early 90s.

4. He left Take That due to creative differences, as well as his rebellious attitude (binging on alcohol and cocaine, as well as missing rehearsals). Take That broke up after Robbie left and got back together, without Robbie, in 2005.

6. He had a duet with Australian pop singer Kylie Minogue in 2000. The hit song Kids is featured on Williams’ Sing When You’re Winning. Kids is also featured on Kylie Minogue’s album Light Years. 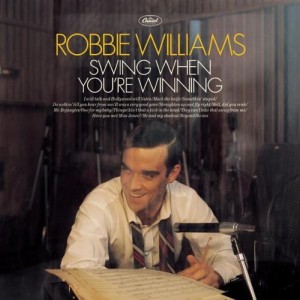 7. He also had a duet with Australian actress Nicole Kidman on his cover album Swing When You’re Winning. The duet was a number one UK hit, and the other famous version is a duet between Frank Sinatra and his daughter Nancy Sinatra. Frank Sinatra is huge influence on Robbie.

8. In the Something Stupid video, Robbie and Nicole (who is 7 years older than Williams) play a happily loved-up couple.

This is not the only time Kidman sang. In 2001, she starred in the romantic musical drama Moulin Rouge along with Ewan McGregor. She also sang in the animation Happy Feet and the musical film Nine.

9. American actress Daryl Hannah starred as Robbie’s love interest in his video Feel (featured on the album Escapology) in 2002. Her movie credits include Splash and the Kill Bill series. Hannah is 14 years older than Williams. The song saw number 4 on the charts.

10. When a magazine published a story that suggested Robbie Williams was secretly not straight, Williams took them to court and he won.

11. Despite leaving Take That because he wanted his music to involve more hip hop, Robbie’s solo albums didn’t explore these genres until his 2006 album Rudebox, the only Robbie album that didn’t involve rock sound.

12. The album following Rudebox was Reality Killed the Video Star and it was released in 2009. It is a pop/rock album.

17. In 2010, Take That, including Robbie recorded the album Progress. Progress became an in instant best-seller. The band’s original 1990 line-up remained.