For the record: No. We do not have a high regard for the music video by Rebecca Black. It should have been painfully obvious from the short piece, but somehow people thought we were serious. Nothing against the girl, of course.

We also don’t subscribe to feeling sorry for Rebecca Black. According to Forbes, the song was at #45 on the iTunes Top Singles chart and sold 37,000 copies in the first week. Apparently she paid $2,000 to have the music video made. Not a bad return on her investment. 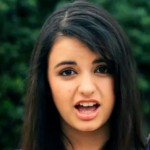 Blame should go to the properly named record label Ark Music Factory. The real problem is the trend as of late to produce music (using the term loosely) that really feels more at home in an SNL sketch. Half of the world population is addicted to clicking the Facebook “Like” button. If you don’t believe us try this experiment: post a comment on any Facebook page and make sure the comment sounds like it was written by a 5th grader. You’ll have at least 5-10 “likes” or “fans” by the end of the day.

If enough people say something is good, there’s a good portion of the population that will believe the lie without so much as judging by themselves.