“Before the Music Dies” is a documentary Narrated by Forest Whitaker that lays out a comprehensive and cautionary story about the deteriorating state of the music business.

The Future of Music Hangs In the Balance.

The film contains interviews with music heavyweights such as Erykah Badu, Eric Clapton, Dave Matthews, and Branford Marsalis. The web site has (UPDATE: used to have) tons of information including videos, trailers, screening information and ways you can get involved.

Of course a film such as this is expected to have a great soundtrack , and it doesn’t fail to deliver. It contains a ton of great music including tracks that have been previously unreleased.

This movie is a MUST SEE for anyone who is a musician and anyone who cares about the decline of the quality of music. Buy the DVD NOW. 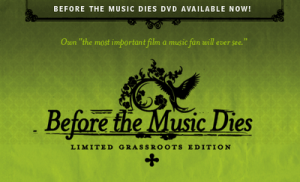