Diego Stocco is a composer, sound designer, composer for video games, and all-round creative guy. Not only are his compositions very interesting to listen to, but he’s got a knack for making his music out of the least likely of sources.

Diego was born in Italy and discovered music at the age of 6 when his parents, hoping to calm him down, gave him his first electronic keyboard. My own parents actually bought me a Korg Poly-800 synthesizer to calm me down too. The soothing sounds of analogue synthesis!

In 2001 Diego started to produce for Spectrasonics and is one of the principal sound designers for a few really cool virtual instruments – Atmosphere, Omnisphere and Stylus RMX. 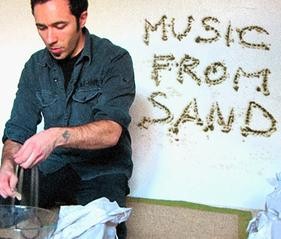 His latest track is made from SAND. Yes, sand – the kind you find at the beach.

I had some sandbags in the backyard that I used in November during a rainy day. I was moving them to a different spot when I heard the noise of the sand. I thought that maybe I could try a new sound design technique so I bought some piezo film transducers and started to experiment with them.

The entire track is created only out of tuned sand tones. No additional sounds, instruments or wave forms were used. The grooves are played entirely live and without the use of sequencers, using various techniques, including taping two piezo films to his fingers.

This is the McIntyre Acoustic Feather contact microphone. It’s designed to be used with a mandolin, but Diego thought it would make a great sand pickup: 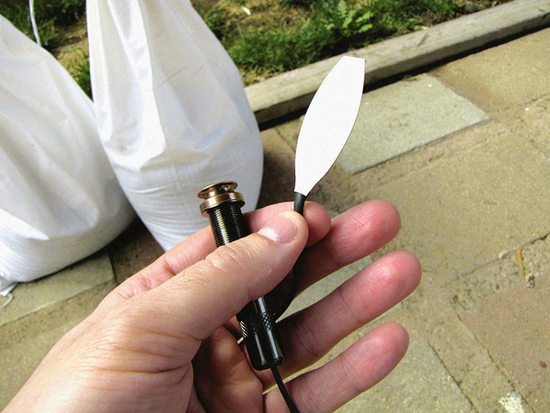 At the beach, setting up the portable recorder. Diego was listening to the track playing from an iPod, and played the sand in sync with the music: 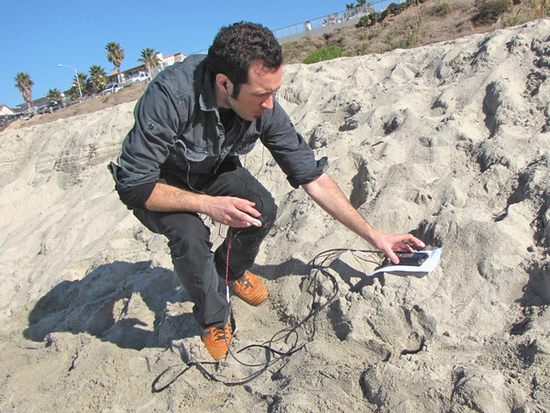 Taping the DT Series Piezo Film to his fingers. These are mainly designed for industrial applications, but he decided to use them to turn his hands into percussive instruments. 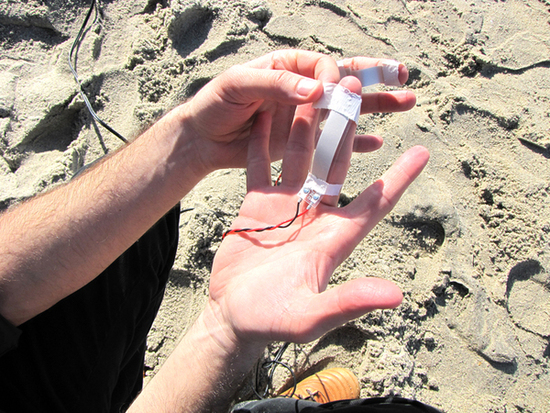 Watch for more on Diego’s inventive music in upcoming stories.