Plasma ion tweeters are an evolution of the “singing arc”, invented by William Duddells in the 1900. He basically reworked a carbon arc lamp – which were known for being fairly noisy.

Now, William found that by varying the voltage to the arc, it changed the sound that was produced. Bingo!

Much later a fellow by the name of Siegfried Klein got involved and tuned it by putting the arc in a small quartz tube. Coupling this to a horn, he was able to produce a speaker and even a microphone.I’m really not too sure if I’d want to tempt fate by putting my mouth too close to one of those things though. 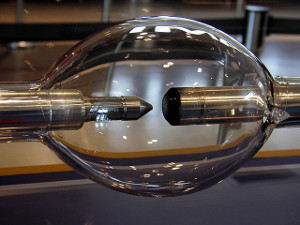 Tweeters made out of plasma arcs have a major advantage – they have no resonance or transient problems. Most audiophiles know that the lighter the material used in a speaker, the faster the response can be, and the better transients they produce. Well, plasma arcs have ZERO weight. The plasma speaker works by moving air via changing the temperature in its chamber.

Prepare to be amazed. Here is an amazing video of an awesome DIY plasma speaker setup.

At one point in the 1970’s, plasma speakers started being produced by a company called Magnat – they’re still in business, mainly producing car audio systems.

Watching the plasma speakers is pretty interesting – they start as a deep purple, and at the edges of the arc you can see them change to a deep reddish pink in the center. When the music has a lot of high frequencies, you can see the colors change in intensity. Very cool.

The main problem with these speakers is that they many need a continuous supply of ionizable gas, such as helium. The plasma has a by-product which we all know: Ozone, and if left in a closed room for long periods of time, it can reach hazardous levels!

A company called Acapella is the only company that I can find that still makes plasma speakers, and they are expensive ($23,000+), but revered for their sound quality.

Here’s another DIY plasma speaker at work. These sort of remind me of the Tesla coil speaker – once again, amazing.

If you want to build a plasma arc speaker on your own, check out the Plasma Speaker tutorial. If you want to build your own “regular” speakers and save a ton of money, grab a copy of Designing, Building, and Testing Your Own Speaker System with Projects.