Brain damage and metal seem to be the two things spoken of most often in one sentence. At any heavy metal concert, you have everyone getting wasted and walking about like they want a fight, if only they could decide where to spasm. The whole evening is drowned in swirling your head, which would make even Frankenstein’s monster clutch his screws in shame. Until you wake up the next morning, with a very stiff neck and a throbbing headache which just won’t go away. You could blame it on the drinks or the 10th time you fell down last night, but now there’s proof why Metal and a love for hard music could actually be the reason for the pain in your neck.

A pair of scientists at the University of New South Wales in Sydney, Australia has come up with some very painful facts. In a field survey (which sounds like the best job in the world), the two scientists Declan Patton and Andrew McIntosh, observed the audience members at various live concerts of and including Motorhead, Skid Row, Motley Crue, Ozzy and others to note the most common style of headbanging, the Up-Down, while possibly headbanging themselves. 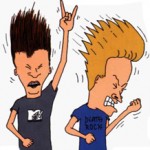 The scientists then asked 10 musicians from local bands to name some of their favorite headbanging songs and constructed a top 11 out of them. Then for completely serious, scientific experimental purposes, the musicians were asked to tap out the beats of songs like Spinal Tap’s “Tonight I’m Gonna Rock You Tonight” and Motley Crue’s “Kickstart My Heart” , against the controls Whitney Houston “I Will Always Love You” , Lionel Richie’s “Hello” and Styx’s “Babe” among exasperated sighs.

The musicians were used to obtain the tempo to get a good measure of how an ordinary headbanger would perceive the beat of the music, and the results were fed into a bio-mechanical model of the brain.

Unsurprisingly, matching your head movements to the tempos of 180 beats per minute doesn’t bear good news for your neck. Soft tissue damage can easily occur at neck jerks going above the safe range of 45° at these beats. The scientists also try to explain how this makes MTV’s Butt-head way more retarded than Beavis. Wayne and Garth, from Wayne’s world seem to fare well at moderate tempos, compared to those guys in the back of their car.

The brain and neck injury can manifest itself as dizziness, incoherent speech (Dude, seriously?), pain in the neck, and stiffness.

So what can you do to limit the damage from such mind numbing results? Possible methods include neck braces, formal training to make sure that your head banging doesn’t exceed the 45° mark, and listening to less aggressive rock or easy music.

The message seems to be: if you aren’t careful you’ll be nodding along to Enya for the rest of your life.