Actors do a lot of things for their roles. They learn how to do their own stunts, ride motorcycles, perform martial arts, fly planes and inevitably sing and/or dance. Below are actors who performed some of the funniest or most remarkable musical performances, along with the details.

This musical from 2002 has 6 Oscars, including Best Supporting Actress for Catherine Zeta Jones. The movie was also nominated in the category for Original Song. The song is called Move On and it was performed by both Zeta-Jones and Renee Zellweger. Richard Gere and Zellweger won Golden Globes for their performances.

Mandy Moore – A Walk to Remember

Mandy Moore may or may not count as actor singing as she is also a singer. But since the lines between acting and singing getting blurry, why not include her?
A Walk to Remember is an adaptation from a Nicholas Sparks novel. It is a drama/romance starring Shane West and Mandy Moore. Mandy Moore’s character is the religious daughter of a reverend, and Shane West plays the popular yet rebel kid. One of his latest actions forces him to be involved in a school play where the leading role is played by Moore.

She sings 5 of the sons in the soundtrack, although she only has one scene actually performing. The song is Only Hope and it has another version on the album, sung by the alternative rock band Switchfoot. Switchfoot has other tracks on the soundtrack as well.

In 2010s romantic comedy You Again, Odette Yustman‘s character Joanna is getting married to James Wolk‘s Will. At their rehearsal dinner, she starts out singing a song horribly, which deeply pleases her high school arch nemesis Marni (played by Kristen Bell). However as it turns out, “the horrible” singing is just a surprise, and the false beginning of an impressive hip hop performance done in cheerleading outfits.

We lost the talented dancer/actor Patrick Swayze in 2009 but still have many movies to remember him by. His most famous movies are no doubt Ghost (1990) and Dirty Dancing (1987). However Dirty Dancing lets Swayze to show more of his skills as he plays a dancer. 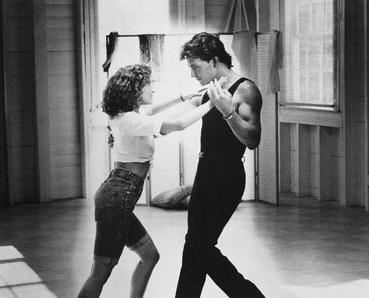 Swayze was a real-life dancer. However, in addition to being the movie’s leading actor and dancer, he also co-wrote and performed a song for the soundtrack: She’s Like the Wind. The song is played in the background while Johnny (Swayze) and Baby (Jennifer Grey) say goodbye. While both actors were nominated for Golden Globes for their performances, the song (I’ve had) The Time of My Life won Oscar for Best Song.

John Travolta and Olivia Newton-John became the favorite on-screen couple of many people around the world when they starred in the hit romantic/comedy/musical Grease. Travolta plays Danny, a high school bad boy. Olivia’s Sandy is the ultimate good girl. When they meet during a summer holiday, they are unaware of each other’s high school reputations. Then they realize they are going to the same school and lots of fun complications, as well as a lot of singing ensue.
Both actors have solo performances, duets and songs where they are joined by the fellow cast members.

The movie is most famous for the songs Grease Lightning, Summer Nights, You’re the One That I Want and We Go Together.

Towards the movie’s ending, Sandy goes through a makeover to become a “bad girl” whereas Danny tries his best to look like a good guy. This is the moment they start performing You’re the One That I Want.