Hasbro/Tiger Electronics has a new toy called A.M.P.(Automated Musical Personality) which is a small robot that plays music. Now, the interesting thing about this robot is that it actually follows you around wherever you go. It’s going to be marketed at 16-25 year old, weighs about 15 lbs and is about 2.5 feet in height.

The robot uses a 2-wheeled balancing system similar to the Segway (by the way, there is a hilarious documentary about the Segway called 10mph: Seattle to Boston that you have to check out) and has a proprietary gyroscopic technology that keeps it upright – when it runs out of battery power, a kickstand automatically pops out to keep it from falling over. It’s 2 rubber wheels are beefy looking and solid and can handle uneven surfaces (perhaps to walk along the sidewalk with you as a robot girlfriend?) 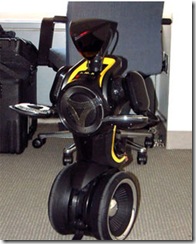 The A.M.P. has a backpack where you can store pretty much any MP3 player, which connects to the robot via a standard 3.5mm jack. It has an optional remote control and 5 different modes: Dance, Track, Drive, Park (like a stationary boombox) and Follow.

Here’s a very rough youtube video showing the movements of the bot (sadly, no sound, but it’s set to an appropriate soundtrack).

Another video with sound is available here .

The music robot has 16 built-in sensors, including 2 infrared sensors to detect an avoid objects, but is susceptible to staircases. It does also have beat sensors which enable it to be able to move to the beat of the music, which plays through a high-fi 3 speaker system.

Other features include touch pads on the robot’s body that allow you to add DJ-like effects to the music playback. It can produce 100 sound effects and displays LED-based animation.

Unfortunately, there isn’t an SDK and you can’t program the bot to do anything that it cannot already do. What a shame, this thing would be great for hacking.

Here’s a clip from their marketing material:

Tiger is taking pre-orders, and the product is slated to become commercially available around October (yes, just in time for Christmas). The expected price is $400-$500 and will be selling in places like The Sharper Image, Amazon.com and Hammacher Schlemme.

These are cool, but the jury is still out on whether or not they are $400 cool. Pehaps it’s just one step closer to the robots taking over.